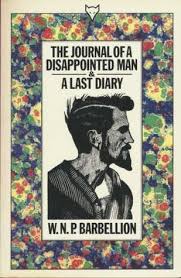 THE JOURNAL OF A DISAPPOINTED MAN AND A LAST DIARY

This is a really quiet and lovely book about W.N.P. Barbellion, born in 1889 in North Devon, died in 1919 of Multiple Sclerosis, so any fireworks in it are the fireworks of a young man physically sick but also sick with the longing to live.  His lifelong passion was for natural history and he started work in the Entomology Department of the Natural History Museum in Kensington in 1912 but his health forced him to resign his post in 1917.   This book was published a few months before his death.

The Journal starts when he was thirteen.  Barbellion offers so much of his life in his writings with his joys, his sadnesses, his doubts and his very natural fears and grumpiness as his health constantly lets him down, he becomes a much loved friend. I first read him years and years ago and go back to him at least once a year. He is lovable, courageous and fascinating; simply a friend you haven’t met in person.

The Harmsworth Self-Educators he mentions were big green books that my own father owned and read and which, many years later, I read, too, because I would read anything that had print on it.  I often wonder what happened to them and think they probably ended up in a jumble sale at the local chapel, which is pretty much where a lot of books came from.

Have been reading through the Chemistry Course in the Harmsworth Self-Educator and learning all the facts and ideas about radium.  I would rather have a clear comprehension of the atom as a solar system than a private income of £100 a year.  If only I had eyes to go on reading without a stop!’